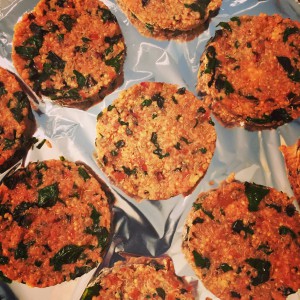 I grew up with finches (the small gray birds with orange cheeks) and thought millet was just birdseed. I had no idea people all around the world ate it until just a few years ago! Millet has been cultivated in Eastern Asia for 10,000 and it is staple crop in parts of India and Africa. After reading about the numerous health benefits, not to mention the fact that it is gluten-free, I think it’s about time it became a part of our everyday diet.

This recipe was inspired by Hillary’s Eat Well veggie burgers which I found in the freezer section at Whole Foods. While I love their version, I thought I could come up with my own that wouldn’t take much time and allow me to add the ingredients and flavors I like. I started with this recipe but then made some changes based on a couple of trials. Add your own twists with different greens and spices. We hope you enjoy!

Recipe notes:  1) I stopped short of calling these “burgers” because I don’t think they are sturdy enough but I do think they would be good in a wrap with greens and a simple sauce; 2) I used Tant Hill’s rainbow Swiss chard but feel free to use most any green you have available; 3) psyllium husk is used a lot in gluten-free baking as it is hygroscopic, which means it absorbs water and becomes sticky, thus holding the patties together. It can be online or in well stocked grocery stores (I found it at Whole Foods).

One thought on “Millet & Quinoa Patties with Curried Swiss Chard”